What are The Most Stolen Items from Homes?

Anyone entering your home with the intent of robbing you want to be in and out of your home in as little time as possible. The average burglary takes under 15 minutes.

Although many burglaries are crimes of opportunity most burglars tend to be looking for specific items to steal.

Where possible a burglar will want items that are small enough to be carried away (particularly if the burglar is on foot) and easy to sell on afterwards.

Here is a list of the most stolen items from homes that have been burgled.

#1 Cash is One of the Most Stolen Items From Homes

Unsurprisingly one of the most stolen items from homes is cash.

Cash is untraceable and fits easily into the intruders pocket. It does not need to be sold on, unless the perpetrator is caught in the act of stealing it, the chances of it being retrieved is extremely slim.

It is surprising how much cash people leave lying around out in the open or in drawers and cupboards. Some people try to hide the cash they have but generally speaking most home owners are not too imaginative about choosing their hiding places and the chances are that any burglar will quickly find your hiding places.

Placing cash in a home safe or strong box provides substantially more security but it is essential that the safe is anchored firmly to the wall or floor. If it is not firmly anchored down there is a good chance that the burglar will simply take the safe or strongbox with him to open later.

The second of the most stolen items from homes is jewelry.

Like cash jewelry can easily be put into a pocket and transported easily. Jewelry is quite easy to sell on particularly if it is gold (or silver) or contains precious stones. Some pieces of jewelry will be sold on to people who are intending to wear it. A large percentage however will be broken down and sold for scrap value.

Most people who have jewelry in their houses tend to be very careless about where they keep it. In many cases it is left in a jewelry box on top of a bedroom dressing table. Other more security conscious individuals may feel that hiding their jewelry at the back of a drawer or inside a glove or sock will be all the protection they need. In reality these will be the first places that any career burglar is likely to look.

Keeping valuable jewelry in your home is simply not a good idea. If you must keep these types of items on the premises they should be stored in a heavy duty safe. A far better idea is, of course, to keep your valuable jewelry in a bank safe deposit box and only retrieve it when you intend to wear it.

Although cash and jewelry are the most desirable items for intruders to steal electronics such as TV sets and games consoles are regular targets for burglars. They are obviously more difficult to transport than cash and jewelry and are more likely to be of interest to a home intruder that has a vehicle available. It may be possible to walk down the street with a games console under your arm without attracting too much attention but carrying a 60” television is likely to look extremely suspicious.

High end electronics are amongst the Most Stolen Items From Homes because they do not need to be searched for. They are openly displayed in your home and are therefore easy to steal.

Although it is difficult to prevent an intruder for making off with your home electronics you should always record the serial numbers of the items which will make identifying them easier should the police manage to recover them.

Smart Phones, Computers, Tablets and iPads are easy targets for a burglar. Just like TV’s and Games Consoles they are generally left out in plain sight.

There is a good second hand market for these items which makes it easy for the thief to sell them on.

Apart from the actual monetary value these devices will often contain a vast amount of personal information. Try to avoid storing sensitive information on your mobile devices or computer and at least use password protection to make accessing the information as difficult as possible.

Any sensitive electronic data should be transferred to an external hard drive which should be stored in a secure environment.

It goes without saying that firearms are extremely desirable as there is always a ready market for them on the street. Rifles, shotguns and hand guns all fetch high prices.

Guns should always be kept in proper gun safes or gun cabinets. In fact in most states in the USA it is a legal requirement for guns to be stored securely. Ammunition should also be stored in a separate secure location.

All guns (if legally owned) need to be registered which means, in theory at least, that if a gun is stolen and recovered it can be returned to the legal owner, providing of course that he/she has recorded the serial number of the weapon.

During the past few years there are a number of prescription drugs that fetch high prices on the streets. Although the thief that broke into your house may not be interested in the drugs for themselves they will most probably steal them if the opportunity arises.

Power tools are also amongst some of the Most Stolen Items From Homes. There is a tendency for most home owners (particularly in rural areas) to own at least some power tools.

If the home owner is in to DIY or does their own car repairs and maintenance the value of the tools in their garage or workshop could be several hundred or even thousands of dollars.

Power tools are relatively easy for a thief to sell on and some second hand tools can fetch a considerable amount of money.

People who own power tools tend to leave them out in open view and rarely secure them in locked tool cabinets.

Most people who see someone walking down the street carrying a tool bag containing power tools would tend to believe that they were tradesmen of some kind going about their lawful business. Very few people would assume that the tools were in fact the proceeds of a robbery and they were witnessing the thieves getaway.

Although wines and spirits are not amongst the most stolen items from homes it does not mean that they are safe and a burglar will not take them. It is unlikely that they will be specifically targeted by a burglar but if he sees something he likes he may take it for his own consumption.

If you happen to collect expensive vintage wines and liquors you should always keep these safely out of sight and secured in a locked cabinet as these may be something that could be worth stealing with a view to selling on for a quick profit later.

Artwork, Clothing and Household Goods are not high on the list of the most stolen items from homes they are not immune from being stolen.

These types of items do not fetch high prices for the burglar they are however easy to sell on fairly quickly without too much effort. Clothes with Designer labels are particular favourites of burglars.

Kitchen appliances and gadgets can also be targeted as they are also relatively easy for a burglar to get rid of and turn a profit.

Artwork and ornamental items will also often catch the eye of a burglar as they are generally simply left on display and there is little or no effort required to remove them.

If you have artworks or ornamental figurines etc on display it is always a good idea to take photographs of them to help with identification should they be stolen and recovered.

Identity theft is becoming a major problem. Of all the things that a burglar can steal from you having your identity stolen is possibly the most traumatic.

Items such as credit cards, debit cards, utility bills, tax returns and medical information can all be used by a criminal to hijack your bank account and obtain credit in your name.

Anyone who robs your home with a view to stealing your identity knows exactly what documents they will need.

A large number of people are extremely careless when it comes to safeguarding personal documents and rarely take the steps they should be doing to safeguard them.

Any documents that contain personal information of any kind should be stored securely in a home safe. Household utility bills should be shredded as soon as they have been dealt with and not just left lying around. Extremely important documents such as Birth Certificates, Marriage certificates, medical records and passports are best kept in a safe deposit box and only retrieved when they are needed.

Although I have listed some of the Most Stolen Items From Homes above bear in mind that once a thief has gained access to your property all of your possessions are at risk.

It is simply not possible to lock away everything that you own. Storing particularly valuable items out of sight in a home safe (or better still in a safe deposit box) is however essential. If you are unlucky enough to be burgled at least try to make it as difficult as possible for them to steal your most treasured and valuable possessions.

The best course of action to avoid having items stolen from your home is to make it as difficult as possible for a burglar to gain access at all.

Install outdoor security measures designed to deter a burglar from wanting to target your home. 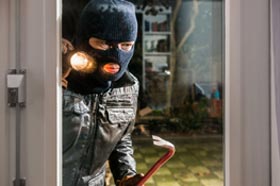